Ben-Wa Balls and the Pelvic Floor 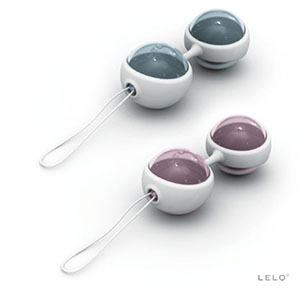 This month’s column was inspired by a client who asked me about ben-wa balls and are they effective in strengthening the pelvic floor. Ben-wa or ben-wah balls are also known as V Balls, geisha balls, Venus balls, rin-o-tama balls or Burmese balls. Ben wa are also Kegel balls and similar to Kegel weights. Ben wa balls can be used to for sexual stimulation, by yourself or with a partner, and also with pelvic floor exercises to increase the strength of the pelvic floor.

The origins of the ben-wa ball is not clear, yet it is believed ben-wa originated in Japan around 500 AD and initially used to increase pleasure for men. Yet, women also realised they too could get pleasure from ben-wa and more recently have been used as part of the training for pelvic floor muscles.

Ben-wa balls were once made as a hollow ball with another ball inside them. The movement of the ben-wa sends gentle vibrations through the vagina. Ben-wa balls now are made from various material and also are not limited to one or two balls but include other designs with remote control for the vibrations.

If you are looking for ben-wa balls you need to decide on size and type of product. Lelo recommends a small size for beginners and women who have not had children while the medium size maybe better for women for women over 30 years and/or who have had children. The team also stocks adult products inspired by ben-wa balls. At Aphrodite’s Pleasure there is a selection of ben-wa balls and ben-wa-like toys.

Lelo produces Luna Beads Mini (small) and Luna Beads. Lelo’s innovation includes the options of two weights of for the internal balls: 28 grams and 37 grams. This gives you greater choice in weights and the ability to mix-n-match weights when using them for Kegel or pelvic floor exercises. Alterantively you might like the Lelo Luna Beads Noir – two balls of 29 mm. You get to choose one or two balls by using the included harness to connect them.

Metal Worx also produce a set of small Ben-wa Beads and medium Ben-wa Beads version of their metal ben-wa balls. These come in their own little carry case for easy storage. Another new product at Aphrodite’s Pleasure is Laid’s Magnetic K1 V Balls. These small balls are smaller enough for any woman and the magnetics of the ball allow you to increase the size by adding more balls.

If you are wanting something a little different to traditional ben-wa balls, then the new Lelo Hula Beads might be the thing. This is the world’s first ben-wa like product which has remote-controlled rotation and vibration control. Nalone, a new entrant to the Australian sex toy market, produces the similar Miu-Miu Balls. These too are remote control have 7 different settings to help you with pleasure and pelvic floor control.

How to Use Ben-Wa Balls

Become comfortable with using ben-wa balls before using them with sex. When using ben-wa balls during sex it is important to try and avoid fast and/or pounding sex. The penis will move the balls around the vagina which will bring increased pleasure to you and your partner.

Looking after your Ben-Wa Balls

It is important you clean you ben-wa balls after each use and store in a dry, cool place. Read the manufacturer’s instructions on cleaning and care of your product. We recommend the Anti-Bacterial Cleaning Spray from Lelo. Yet, you can use warm water and a mild soap. Ensure you rinse them well to rid the balls of any soap residue. Also dry them properly before storing them.

Similarly, Tiina Arvonen and colleagues (2001) reported that women who used ben-wa balls had a greater improvement in pelvic floor strength and greater reduction in urine leakage than women who used pelvic floor exercises alone. These studies provide some answers to the question.

If you are experiencing urinary incontinence you need to speak to your GP or pelvic floor physiotherapist.

Remember to use your toys responsibly. Good sex is everyone’s right as long as it is sane, safe and sensual.