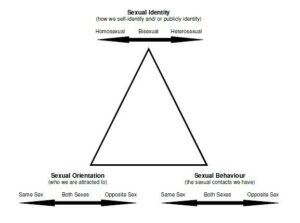 This month’s column I have decided to talk about sexual identity. I am regularly asked various questions by both women and men about whether they may be gay or lesbian or bisexual based on a same-sex experience. As you will read, it is not so clear when it comes to defining sexuality.

I have a male friend who identifies as straight, is attracted to women, and is comfortable having sex with both women and men. His girlfriend enjoys threesomes with two men and he does not see that if he engages in sex play with another man that he is anything other than straight (heterosexual).

So How Can These People Be Straight (Heterosexual)? 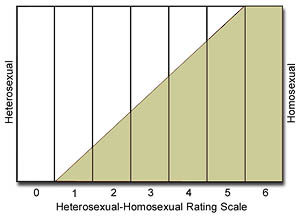 Being gay, lesbian or bisexual is not easily defined, as you have just read above. Many people think a person’s sexual identity is defined by who they have sex with – It is not that simple. Nor is it easy to fit a sexual identity into a discrete category.

Alfred Kinsey, a famous sex researcher from the 1940s onwards, described sexuality on a seven-point scale from exclusively heterosexual to exclusively homosexual. Kinsey recognised the variety in the expression of human sexuality based on his interviews with people about sexual behaviour. This study developed ‘The Kinsey Scale’.

Another way to think about sexual identity is to use the Sexual Trichitomy developed by Deb Ollis and colleagues at the Australian Research Centre in Sex, Health and Society in Melbourne. They suggested that a person’s sexual identity contains three aspects:

For many people there is an alignment between the identity-attraction-behaviour trichotomy. It is also possible for someone to identify as heterosexual (straight), be attracted to the opposite sex and have sex with people of both genders. When we consider these aspects we can accommodate a greater variety in sexuality and its expression. As you read above.

So as you can see defining one’s sexuality is not straight (no pun intended) forward.

Am I Gay (or Lesbian or Bisexual?

My answer: It depends on many factors.

The expression of human sexuality is varied. It is not always possible to sit comfortably in the categories of straight, gay or bisexual. Being straight/gay or bi is not simply defined by who you have sex with. We also need to factor in how someone identifies and who they are attracted to.

If you have concerns about your sexuality and identity see a sex therapist in your local area who will be able to work with you about the issue. It is important people have a healthy sex life, and a healthy sex life is one without anxiety about sexuality.


Disclaimer: The information contained in this document should be read as general in nature and is only to provide an overview of the subject matter covered. Please read product packaging carefully and follow all instructions.