A Guide to Male Sexual Anatomy 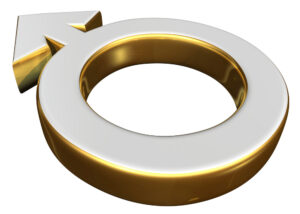 Getting to Know Your Tackle

This month we discuss the male sexual anatomy. As it is more than just the penis and testicles, we will take a tour of men’s anatomy and discover some new knowledge. I am surprised how many people I work with in therapy do not know the sexual anatomy of men; including men themselves. The extent of many people’s knowledge is the penis shaft and the testicles in the scrotum. There is so much more.

Did You Know… … …
In my research on penises and penis size issue (a future column) I identified a list of approximately 1,700 words for the penis. Great Australian words like tackle, tockley, and junk are but a few of the terms for the penis. The words used for the penis often are associated with aspects like power, strength, tools, sports equipment, and food or sustenance. In comparison, terms for female genitalia are often focused on receptacles—places to receive the penis—and have passive, not active connotations. The words for female genitalia are more likely to be derogatory and have negative connotations (Braun & Kitzinger 2001); think of swear words and the attitudes behind them.

The external anatomy includes the penis, the scrotum and the testicles. This is all most people think about, yet a man’s sexual anatomy is more complex and interesting than just these. Knowing more about male sexual anatomy can help with giving and receiving sexual pleasure, and promote understanding about what is normal.

The penis is the largest part of the male sexual anatomy. The penis is made up of three regions: the root, the penis shaft (body), and the glans. The penis varies in size and shape between men – all penises are normal. Most men have an average erect size penis between 13.9 cm to 17.75cm (5.5” to 7”).

Penis Root
The root, or radix, of the penis consists of the bulb of the penis in the middle of legs, or crus of the penis. The radix can be felt in the perineum area of the body when a man has an erection. It is the radix which attaches the penis to the rest of the body.

Penis Shaft
The body or shaft of the penis, also known as the corpus. The body of the penis is cylindrical and contains three chambers of erectile sponge-like tissue which become engorged with blood during erections. The two chambers on the top side of the penis are called the corpora cavernosa. The third chamber on the underside of the penis is called corpus spongiosum. The skin of the penis is elastic allowing it stretch during an erection. The urethra (tube for carrying urine and semen) is contained in the shaft. 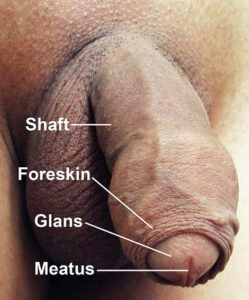 The Scrotum and Testes

The scrotum, or sac, is the bag-like pouch which holds the testes. The scrotum sits behind and below the penis, and contains many nerves and blood vessels. The scrotum has a climate control function and a protection function for the testes. When a man gets a fright the Cremaster muscle (in the wall of the scrotum) pulls the testes closer to the body. This also happens during cooler temperatures. For healthy sperm production the testes require a slightly cooler temperature than the body. The wrinkled appearance of the scrotum is controlled by the Dartos muscle. When the temperature is hot, like on a warm day or during a warm shower, the scrotum relaxes away from the body – this is the result of the Cremaster and Dartos muscles.

The testes, or testicles (or balls) are oval shaped and vary in size between men. The testes are found in the scrotum and are secured at either end by the spermatic cord. The testes are responsible for the generation of sperm, as well as testosterone, which is the primary male sex hormone. The testes consist of coiled tubes known as seminiferous tubules. It is in these coiled tubes sperm are made.

The Epididymis is the long coiled tube found on the backside of each teste. The epididymis acts as an incubator, maturing the sperm, as well as being responsible for the storage and transport of sperm. Sperm takes approximately 10 to 14 days to mature. Faulty and old sperm are reabsorbed. The sperm is transported to the vas deferens during arousal via muscular contractions.

There is more to the male sexual anatomy inside the body. These include: the tubes which carry the sperm (vas deferens); the glands responsible for adding fluid to the sperm to create semen or ejaculatory fluid; and the prostate gland.

Vas Deferns
The vas deferens, or seminal duct, carries mature sperm from the epididymis into the pelvic cavity. The vas deferens is approximately 30cm long. When a man has a vasectomy (usually for contraceptive purposes) a small piece is cut out of the vas deferens so the sperm cannot get through, and they are reabsorbed instead.

There are three glands called the accessory glands. These glands function to lubricate the pathway for sperm and also nourish sperm on their journey from the epididymis to the glans during ejaculation.

Seminal Vesicles
The seminal vesicles are sac-like and attached to the vas deferens to one side of the bladder. The seminal vesicles produce a yellowish sticky fructose (sweet) fluid which provides sperm with fuel (energy) and aids in their motility, or movement, once ejaculated. Seventy per cent of semen is made up of fluid from the seminal vesicles.

Do not forget the skin; it is our largest organ and contains millions of nerve endings. When we consider our sexual anatomy, remember to include the skin. It is a vital part of everybody’s sexual anatomy and adds to the pleasure of stimulation. Don’t just focus on the reproductive organs – focus on the whole body and the person.

When next playing by yourself, or with a partner, why not explore yourself a little more? There is more to a man’s sexual function than just an erection – and more to his anatomy then just his penis. I often encourage men to explore their tackle and add more arousal to their experience by incorporating more than stroking the shaft of the penis. The testicles, the glans, the perineum, the anus—and most of the skin of the body—all form part of a man’s sexual anatomy. Play with it all, not just one bit. Experiment with different types of touch, and notice for yourself, or communicate with your partner if you are having partnered sex, what you enjoy, and what is not pleasurable. This curiosity, combined with developing good communication skills that allow you to give feedback in a positive way, will add a new dimension to your sexual pleasure.