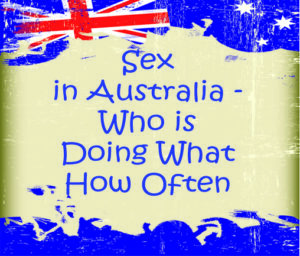 Sex in Australia – Who is Doing What How Often?

The study explored the experiences and attitudes of 9,963 men and 10,131 women aged between 16 and 69 years from all states and territories in Australia. According to the study’s authors the sample represents the Australian population based on 2011 census(1).

One aspect of sex therapy I am always fascinated with is people’s embarrassment when talking about sex. It is not surprising people are embarrassed when talking about their personal sexual lives – we are taught from a young age that sex is private; personal; something we do not talk about.

These people also know they are anonymous. Whereas sitting with sex therapist talking about sex is not so anonymous (yet confidential!) (1)

What are People Doing?

How often are People Having Sex?

People in their twenties reported most frequent sex as 2.1 times per week and this declined with age, so older people reporting less frequent sex (3).

Sex in Australia – What do we know

Many people come to see me and say their relationship is perfect but we are not having sex. I always ask couples in this situation how often they think they should be having sex. Many people answer with three to four times per week. When I ask why they think this, I am often told because that is how often everyone else does it. Well the average number of times is much less than the three to four times a week, with most people having sex only once per week. So if you are having sex about once per week you are experiencing a sex life most Australians are experiencing.